Altium President Emma Lo Russo explains the company’s recent announcement of amnesty for illegal users of its EDA software in China. That offer is just one part of the Australian company’s strategy for gaining market share in China.

Chris Shaw of New Electronics, interviews Emma and asks about how Altium is tracking and to explain the recent changes at Altium.

Read the full interview at: http://www.newelectronics.co.uk/article/18140/Interview-with-Emma-Lo-Russo.aspx

Snippets of the transcript below:

Emma talks to the Manly Daily about Altium’s changes to its business model.

The following article was published in the Manly Daily. 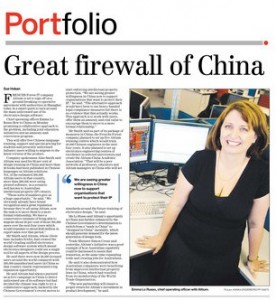 The article reads as follows:

Frenchs Forest IT company Altium is set to sign off on a ground-breaking co-operative agreement with authorities in Shanghai today in a smart quest to turn around the mass unlicensed use of its electronics design software.

Chief Operating Officer Emma Lo Russo flew to China on Monday promising a collaborative approach to the problem, including joint education initiatives and an amnesty-and-conversion program.  This will offer free Chinese-language training, support and special pricing for students and presently unlicensed industry users willing to migrate to the latest version of the product.

Company spokesperson Alan Smith said Altium was used for 80 per cent of design training in China and more than 20 books had been published in Chinese languages on Altium solutions. Yet, of the estimated 300,000 Altium users in that country, more than 290,000 were using pirated software, in a scenario well known to Australian intellectual property (IP) owners.

“Those sorts of numbers give us a huge opportunity,” he said. “We obviously already have brand recognition and a great reputation because they’re all using Altium, now the task is to move them to a moe formal relationship.  We have a conservative estimate of being able to migrate about 20 per cent of those 300,000 users over the next gour years which would translate to about $100million in export sales over that period.”

Mr Smith said Altium, whose client base includes NASA, had created the world’s leading unified electronics design software system which meant electronics designers could use a single tool for all aspects of the design process.

He said there were now 26,000 licensed users around the world compared with 300,000 unauthorised users in China so that country clearly represented a big expansion opportunity.

He said Altium had always pursued an active campaign in China to detect unlicensed use of its software but had decided the climate was right to try a collaborative approach, backed by the Chinese Government’s recent moves to start enforcing intellectual property proection.  “We are seeing greater willingness in China now to support organizations that want to protect their IP,” he said.  “The alternative approach would have been to use heavy-handed legal compliance measures but there is no evidence that that actually works.  This approach is to work with users, offer them an amnesty and real value to encourage them to move to a more formal relationship.”

Mr Smith said as part of its package of measures in China, the Frenchs Forext company planned to set up five Alitum training centres which would train 40,000 Chinese engineers in the next four years.  It also planned to set up electronics engineering centers of excelence in selected universities and create the Altium-China Academic Association. “that will be a peer network of professors, educators and Altium managers in China who will set standards around the future training of electronics design,” he said.

Ms Lo Russo said Altium’s opportunity in China was further enhanced by the Chinese Government’s determination to switch from a “made in China” to “designed in China” mentality which should generate demand for the latest generation of design tools.

Trade Minister Simon Crean said yesterday Altium’s initiaitve was a good example of how Australian capability could be harnessed to assist that transition, at the same time expanding trade and creating jobs for Australians.

He said it also demonstrated how Australian companies were benefiting from improved intellectual property laws in China, which had resulted from its membership of the World Trade Organization.

“The new partnership will ensure a proper return for Altium’s investment in product development,” he said. 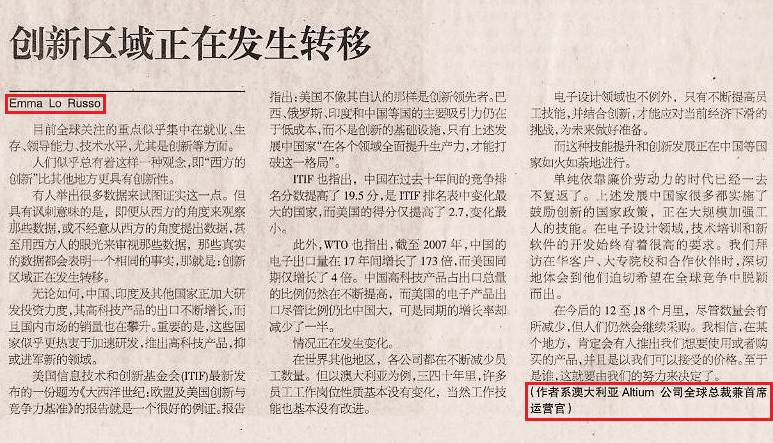 Here is the story in English:

“Our innovation is not superior to theirs”

A fixation seems to be appearing in the worldwide debate about jobs, survival, leadership, technical excellence, and perhaps most markedly, innovation.

It’s a fixation that, somehow, “western innovation” is “more innovative” than other regional innovation, especially innovation emanating from “the east”.

In this era of global trade, global travel and global connectivity, this somehow seems foolish at best.

Time and again, data is presented from that perspective. What’s ironic, though, is that even if we view those data from a western seat, and even if the data are presented through western filters (even inadvertently), and even if those data are read by western eyes, the data still say the same thing: innovation is shifting.

By any measure, China, India, and other countries are investing more in R&D, are exporting more high-technology goods and are selling more to internal markets. Most significantly, they seem more enthusiastic about either accelerating these effects, or moving into new areas.

One example is a new report from America’s Information Technology and Innovation Foundation, called The Atlantic Century: Benchmarking EU and US Innovation and Competitiveness. Even as the report states that the US is not the innovation leader it thought it was, it goes on to say, “Many nations that get much of the attention as competitors in the innovation economy… including fast-developing Brazil, Russia, India and China… actually score at the bottom of the rankings… The main attraction of these nations remains their low costs, not their innovative infrastructures, and this situation will remain likely for many years, at least until they raise productivity in a wide range of sectors.”

Elsewhere, the WTO reports that China’s electronic exports grew 173 times in the 17 years to 2007. The US grew four times. The proportion of total exports from hi-tech goods also grew in China. The US, albeit with a much larger proportion, halved.

So something is changing.

In Australia, the closure of its factories by Pacific Brands triggered the predictable, sorrowful outcry about Australian jobs, with just a hint of how shocking it is that these jobs are going ‘somewhere overseas’, meaning China. Yet many of these workers had been at Pacific Brands for 30 or 40 years, doing essentially the same jobs, certainly with essentially the same skills.

It’s re-skilling over and over again, combined with innovation, whether it’s in electronics design or clothing, that should set the agenda for managing the current economic downturn, and preparing to the future.

This is what is happening in countries such as China.

It is no longer about so-called cheap labour. These nations, in many cases under national policies, are re-skilling en masse. In electronics design, the industry in which Altium operates, the appetite for technical training and new development software runs unabated. Altium, as one example, is growing sales in China three times faster than overall. When we visit and meet with customers, universities and partners, the desire to be ahead of the rest of the world, along with considerable self-belief, are obvious.

Our future, as individuals, as companies and as nations, is in our own hands. Governments should focus on investments for companies that re-skill over and over again, that reinvent themselves over and over again. Individuals should clamour for these new skills, preferably building on those they have already.

But let’s not blame others. We will continue to buy underwear, cars, fridges and mobile phones. We might do so in fewer numbers in the next 12-18 months. But someone, somewhere, will make products we want to use or own, at a price that we are prepared to pay, for the quality we expect for that price. As to who this is, is down to us.

The China Business News Daily is considered the most influential daily business newspaper published nationwide. CBN Daily is 100% focused on the key issues and current affairs that have significant impact on the macro economy and the business world. The newspaper provides information and insights for business leaders and affluent professionals across China. 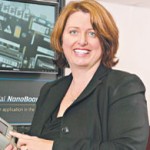 Emma announces innovative approach to dealing with piracy, here in an interview with Mahesh Sharma of the Australian:

Emma is interviewed by ABC News (live) regarding Altium’s big NASA deal where they standardized all of the design of their electronics to Altium’s solution.  She takes the debate into the need for greater support for innovation and educating more world class developers (and engineers) here in Australia: