How often have you seen or been in situations where everyone around you is busy discussing, dealing and deciding on the smaller, easiest issues to address, and the item that is most likely to be a showstopper is being overlooked or held-over to address at another time. 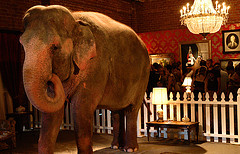 The “elephant” is usually a bigger issue we choose to avoid because we know it will be time-consuming, painful and uncomfortable to deal with.  So we take comfort in keeping busy with all the other things that can be done instead.

More often than not, it is the smallest things being left unresolved that prevents us from bringing to conclusion the projects we are working on.

In reality we find that either issue – big or small – no matter how far forward we move the project or initiative we are working on, it can never be fully resolved and finished until the outstanding matter is resolved.

Recently I was in discussions with a business.  They had engaged me to discuss their overall business proposition, position and product portfolio ahead of a launch.   There were many outstanding matters to be dealt with and decisions to be made and they were rushing through their list to get feedback on all of them.  However there was a starting showstopper, and no matter how much they wanted to cover all the later issues on the list, if they did not resolve the basic starting proposition, they were not going to be able to resolve anything else, nor achieve a successful outcome.

Through further discussions and exploration, it became evident that there was an issue of avoidance in dealing with perhaps the biggest fundamental showstopper (the elephant in the room).  There was clear conflict in the direction by two key principals of the business.  Each saw it differently, and the rest of the team was busy trying to avoid bringing these differences of opinion into focus let alone to a conclusion and final agreement.  Lots of busy work was being done on other facets, giving a false sense of progress, however it was evident there was no way this could work without getting a common agreement from the two conflicting principals.  And this agreement was fundamental to the success of the next stage of their business.  Once the elephant was attended to, the next stages of business could then move forward.

Discomfort of conflict is often the underlying reason of why issues will be left unresolved although there are many cases where it is avoidance of having to work through the difficult aspects of the project.  It is too easy to spend time on the sexier, easier, showier parts of a project or to spend time on the areas that we have greater confidence, expertise or experience in.  Meanwhile the clock races on towards the deadline.

The beauty in attending to the elephants early is the quality of solution that can follow. The earlier you have to solve the issue, the more creative the solution.  And the solution may be very different from what you were first thinking or fitting the rest of the non-critical elements around.

As I have seen firsthand and Edward de Bono is noted as saying:

“It is well known that “problem avoidance” is an important part of problem solving. Instead of solving the problem you go upstream and alter the system so that the problem does not occur in the first place.”

To get this benefit you need to first attend to the elephants.

3 Replies to “Attending to the elephants”